There are a couple of routes to hike between Mui Wo and Discovery Bay. One is the relatively easy and shorter route via the Trappist Haven Monastery, and the other is the more challenging and scenic hike along Lo Fu Tau Country Trail.

The Lo Fu Tau Country Trail technically doesn’t connect the two neighbourhoods on Lantau Island but is a 3.4 km section of the trail between them. At one end of the trail is Lo Fu Tau, also known as Tiger’s Head, the tallest hill in Discovery Bay. And on the other end is the Hong Kong Olympic Trail.

For me, the Lo Fu Tau Country Trail is another quintessential example of hiking in Hong Kong – a rugged country trail, with glimpses of a world-class city on either side.

A quick note about my route in the map below. I ended up taking a longer, scenic route up to Mong To Au Shelter Pavilion, which I wouldn’t advise. Hence, the distance shown on the map is slightly longer than the recommended route.

The most important of which is that the hike up to Lo Fu Tau (Tiger Head) is quite treacherous from Discovery Bay. It’s rugged, steep, and full of loose gravel and rocks. If given a choice, I would rather come down this way, than go up.

But of course, many love the challenge of climbing up to Tiger Head from Discovery Bay. So, it’s your choice where to start this hike from. However, for the sake of this guide, we will hike from Mui Wo to Discovery Bay, which I believe will be more suitable for the vast majority.

To start this hike, make your way to Mui Wo. If you’re coming from Central, catch the ferry from Central Pier Number 6. The ferries run quite frequently as you can see from their schedule.

You might enjoy
Devil's Paw (Devil’s Claw) and Snoopy Rock

Or if you’re coming from Tung Chung, you can catch bus 3M to Mui Wo.

The Mui Wo Waterfront Promenade

Turn right on this bridge towards Silvermine Beach

Immediately after Silvermine Beach Resort, turn left and walk alongside the resort’s wall till you reach the lane at the back. Once at the lane, turn right and walk beside the village houses.

Walk beside the houses

Soon you’ll come across a fork in the path. Here, turn left onto the trail that leads you to Silvermine Cave (follow the sign). The path cuts through the back of the village and merges with the Hong Kong Olympic Trail, next to Silvermine Waterfall.

Towards Mong To Au Shelter Pavilion

From the Silvermine Waterfall, continue on Hong Kong Olympic Trail towards Silvermine Cave.

The Hong Kong Olympic Trail, or the “Islands Nature Heritage Trail”, is a 6.5 km trail between Mui Wo and Tai Ho Wan, a large bay next to the airport.

Stay on the Hong Kong Olympic Trail for the next 900 metres till you arrive at the Mong To Au Shelter Pavilion.

You might enjoy
Castle Peak Hike via Tsing Shan Monastery

For now, continue past Mong To Au Shelter Pavilion for another 150 metres till the trail curves left. If you continue on the trail for another 600 metres, you will reach the start of Lo Fu Tau Country Trail. But to take the shortcut, turn right and walk through the grass. Once you reach the trees at the end of the grassy patch, turn left.

Turn left to continue on the Hong Kong Olympic Trail. Turn right for the shortcut.

From this point, continue along the unmarked trail, and keep an eye out for colourful ribbons that act as markers. You’ll know if you’re on the right track if you cross a small stream.

If you would have taken the Hong Kong Olympic Trail route, it would have been a 1.2 km hike to arrive here. But the shortcut cuts it down to 400 metres, thereby saving you approximately 800 metres.

The hike from here on is relatively straightforward. It’s a gradual incline all the way, with a few steep sections.

To me, Lo Fu Tau Country Trail feels like an urban oasis in Hong Kong! Here you are on a rugged hiking trail in the wilderness but surrounded by an urban metropolis on either side.

To begin the hike on Lo Fu Tau Country Trail, turn right from where the shortcut meets the trail. The trail initially runs alongside the Discovery Bay Golf Club. Needless to say that there is a stark difference between the lush grass below and the path that you’re walking on.

After the golf club, the trail continues at a gentle incline before reaching a steep flight of uphill steps. Fortunately, this is climb is relatively short. And once you reach the top, the trail returns to a relatively flat surface again.

You might enjoy
Our Favourite Restaurants Outside The City

The steps after the golf club

For me, the next section of the trail is characterised by interesting looking rock formations and boulders that are quite picturesque.

So many rocks and boulders ahead

A few hundred metres ahead is your first rocky encounter – a massive boulder right in the middle of the trail. It’s hard to miss it!

Big boulder in the middle of the trail

After this roadblocking boulder, the trail continues around the hill and then up a flight of steps. At the end of the steps is the Standing Rock, an obvious name for a large rock that stands upright.

And opposite the Standing Rock, about 50 metres ahead, is another group of rocks in the form of a ledge. The ledge rock makes for a very Insta-worthy shot!

The rocks in the form of a ledge

The next section of the trail is the most scenic in my opinion. From the Standing Rock, Lo Fu Tau Country Trail continues along the Discovery Bay Reservoir.

From the trail, you can see the reservoir, the Discovery Bay Golf Club, and even the Hong Kong skyline on a clear day. And on the other side, you can catch a glimpse of Hong Kong Airport.

Views of Hong Kong Airport to your left

As the trail continues its uphill climb, the airport becomes more clearly visible. Although this section of the trail is very scenic, it’s not shaded at all.

The final steps to the top of the hill

After another few hundred metres, the trail finally arrives at the hill-top plateau. And from here you can finally see Lo Fu Tau just up ahead.

The top of the hill is mostly flat

Made it to Lo Fu Tau

At 465 metres, Lo Fu Tau is the tallest hill in the Discovery Bay area. The top of the hill resembles a tiger’s head, hence its name.

From the Lo Fu Tau viewing point, you get sweeping panoramic views of the surrounding areas! At the back, you can see Castle Peak, Tuen Mun, and aeroplanes landing or taking off from Hong Kong Airport. And ahead Discovery Bay, the golf course, and reservoir. Also if it’s a clear day, you can see all the way to the Hong Kong skyline!

To the Discovery Bay Lookout Point

Warning: The next section of the trail is extremely treacherous. Even if it’s downhill, it’s not easy. It’s steep and slippery, full of loose gravel and rocks. Descend slowly and with caution.

As you begin your descent, there is an extremely photogenic cliff, approximately 300 metres below Lo Fu Tau Viewing Point. The cliff is slightly off-track from where the trail turns left and heads downhill.

The viewing cliff is just ahead

Enjoying the views of Discovery Bay

I wonder if this cliff is what resembles a tiger’s head.

Anyway, after you’re done taking pictures and admiring the view, return to the trail. From here on, the trail becomes extremely rugged and rocky. So, it does help if you sit down and descend.

Personally, I found the section just before the trail curves right to be very slippery thanks to all the loose gravel. Fortunately, it becomes less steep after the curve, but it’s still not a flat surface.

After the trail curves and runs parallel to Discovery Bay, you’ll notice a few paths towards the left. However, I would advise that you continue straight. At the end of the slope, the trail finally descends into a flat, bushy area. And once you cross this area, it exits onto a paved road.

The trails heading down to Discovery Bay

Be careful as you descend this section

The flat, bushy area before the trail ends

Turn left once on the paved road, and walk till the end where you’ll see the Discovery Bay Lookout Point.

Turn left at this paved road

Walk through the trees to the Lookout Pavilion

Once you’re done admiring the views from the lookout point, turn right and walk down the steps. At the end of the steps, continue downhill along the bumpy dirt trail.

View of Discovery Bay from the Lookout Pavilion

Take the steps down from Discovery Bay Lookout Pavilion

Turn left at the end of the steps

This section of the trail is very uneven and bumpy

The uneven trail finally ends at these steps

Turn left at the end of the steps

Now at this point, you could turn right, take the shortcut through the trees to Discovery Valley Road. But I wouldn’t advise that you do this unless you’re confident that you can go down a 7-foot drop, without any support.

Finally, here’s a shortcut you can take. Walk down Discovery Valley Road till it meets Discovery Bay Road. Cross at the intersection, and walk through the car park onto Plaza Lane. And at the end of the lane, you’ll finally arrive at Discovery Bay Beach and Discovery Bay Plaza.

Cut through the cark park

After reading this guide to the Lo Fu Tau Country Trail, I hope you understand why I think most would prefer starting the hike from Mui Wo instead of Discovery Bay.

Me standing on top of the Tiger’s Head

Also, if you want to hike between the two townships on Lantau Island during the summer months, I would recommend the shorter and shaded route via the Trappist Haven Monastery. Lo Fu Tau is best saved for the cooler months.

We hope you enjoyed this guide to the Lo Fu Tau Country Trail. Feel free to share it on the social media channel of your choice, or drop us a comment below. 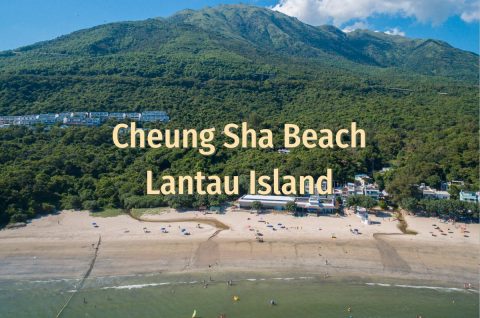 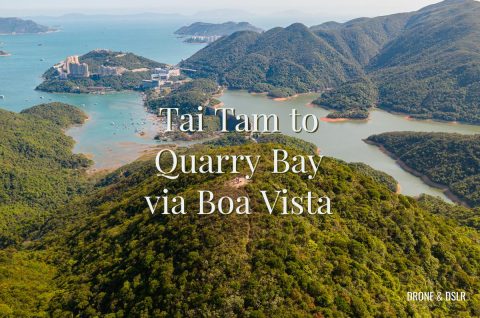 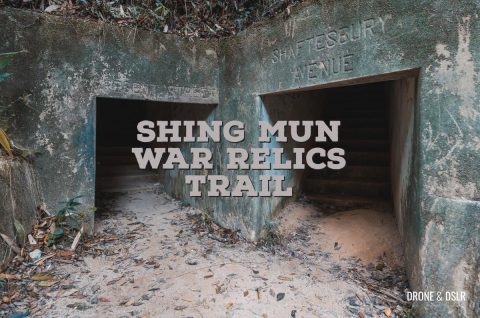 We are planning to give this one a try soon. But one question – isn’t it easier to hike up the steep slope from DB to LFT than to hike down? I am worried about the slippery nature, weak knees and weak back. Any comments? Thanks!

If you’re talking weak knees and a bad back, then I would rather you hike up Lo Fu Tau from Discovery Bay. It will definitely be less jarring on your knees.

Thanks for your comment. We just hiked up from DBay. It was was steep but manageable. We are glad we didn’t come down the slope to DB, which would have been impossible for those with weak knees/back.