Castle Peak Hike is a relatively short but challenging hike up the tallest peak in Tuen Mun. With the transmitting stations on top of its summit, Castle Peak (or Pui To Shan, 杯渡山) is easily recognisable as it towers over the district and is visible for miles.

Castle Peak is one of the three “Sharp Peaks of Hong Kong”, and at 583 metres it’s the tallest among them. It also has the distinction of being the only prominent peak in Hong Kong not within a country park.

As with the other sharp peaks of Hong Kong, the Castle Peak Hike is both challenging and scenic. But it also has cultural and historical significance, which I talk about below. Needless to say, the views from the hike and the summit are gorgeous and unique thanks to the Castle Peak Hinterland, the basin that resembles the Grand Canyon (but on a smaller scale).

There are a couple of trails to hike up Castle Peak. The two popular ones are via the Tsing Shan Monastery, and via Leung Tin Au. Needless to say, both are challenging.

This guide will focus on the hike to Castle Peak via the Tsing Shan Monastery.

The Castle Peak Hike via the Tsing Shan Monastery is shorter but steeper than the hike via Leung Tin Au. The elevation profile should give you an idea that it is a non-stop, uphill hike. But luckily, a larger portion of this trail is shaded as compared to the trail via Leung Tin Au.

However, if you’d like to know how to hike to Castle Peak via Leung Tin Au, follow our guide for the Pineapple Mountain Hike and turn towards Castle Peak at Leung Tin Au.

The starting point for the Castle Peak Hike is Hing Choi Street in Tuen Mun. Depending on your location, you may need to use a combination of MTR, bus, or Light Rail to arrive here. We suggest using Google Maps to map your arrival to the starting point.

If you plan to take the Light Rail know that Hing Choi Street is in-between Tsing Wun and Tsing Shan Tsuen stops, which is where numbers 610, 615, and 615P stop.

Once you reach Hing Choi Street, get onto the same side as St. Peter’s Church.

Once at St. Peter’s Church, walk till the end of Hing Choi Street, and then turn left onto Yeung Tsing Road.

Walk for another 20 metres till you notice an ornate gate for Sze Lo Temple. Cross the road, and onto the path next to the gate. This is the start of the Tsing Shan Monastery Path.

Tsing Shan Monastery Path may be short but it has a couple of attractions along the way. It’s also the point from where the uphill incline begins.

As you walk up Tsing Shan Monastery Path, past the shrine on the side of the path, you’ll come across the first Buddhist temple complex. Unfortunately, the temple complex was closed when we visited.

The shrine on the side of Tsing Shan Monastery Path

Continue walking down the path till the next attraction, the Heung Hoi Ming Shan Memorial Archway.

The Heung Hoi Ming Shan Memorial Archway was erected in 1929 and is a Grade One Historic Building.

The archway was built to commemorate Sir Cecil Clementi’s (the 17th Governor of Hong Kong) visit to Tsing Shan Monastery in 1927 and 1928. The engraving of the four gilded characters on the archway, heung hoi ming shan (香海名山), meaning Fragrant Sea and Prestigious Mountain, was done by Sir Cecil Clementi. You can learn more about the Heung Hoi Ming Shan Memorial Archway here.

The stairs go up to the Tsing Shan Monastery. Stay left to continue the hike.

The Castle Peak Hike continues towards the left, but you can take a quick break to admire Tsing Shan Monastery and learn about its history.

Tsing Shan Monastery, or Castle Peak Monastery, is one of the oldest monasteries in Hong Kong. Its significance as a historic landmark is unmatched as it’s proven to be the birthplace of Buddhism in Hong Kong.

It also has a beautiful legend behind its origin as it was once the resting spot for an Indian monk, Pui To, who travelled across the ocean in a wooden cup. He was attracted by the natural surrounding of the location and built himself a chalet here for practising meditation. You can read all about history on the Tsing Shan Monastery website.

But the Tsing Shan Monastery also has a very important role in recent cinematic history. It was featured in the opening scene of “Enter the Dragon”, the 1973 Bruce Lee movie, and was the location for one of the most famous scenes involving the “pointing finger” lesson.

To be honest, the challenging part of the Castle Peak Hike doesn’t start till the Tsing Shan Path. Up till this point, it’s a relatively easy walk up an incline.

Steps with the Yellow Rails

Hau Sze Path and the start of the yellow railing

Continue straight from the pavilion (don’t turn right), and up the steps to the pavilion on the right. Next to this pavilion is a sign warning all hikers of the steep climb that awaits them ahead.

Continue past the Tsing Shan Pavilion on Hau Sze Path

Go up the steps to the pavilion and begin the arduous climb up the Tsing Shan Path. From this point on, it’s a constant uphill climb! Just what the sign said.

And so the climb begins!

Thankfully this path is shaded most of the way

So, go slow and climb at a comfortable pace. Fortunately, almost the entirety of this section is shaded.

The Tsing Shan Path can look a bit daunting in parts

Just before this section comes to an end, the steps give way to a flat incline. And as the incline emerges from the shaded area, Castle Peak and its transmitting stations are finally visible above.

At the point where the yellow railing meets the green railing, there is a nice resting area on either side of the trail. We highly recommend taking a break to catch your breath and enjoy the views.

Take a break from all that climbing

The resting area does have some nice views of Tuen Mun

Steps with the Green Rails

There is an immediate and visible change in the Tsing Shan Path from the resting area. But fortunately, as the trail gets more rugged, the views get better!

There is a small viewing platform on the steps shortly after the resting area. Although the views are nice, they’re still primarily of Tuen Mun below.

A pretty decent viewing point from the steps

This section of the hike looks more rugged

Shortly after the viewing platform, the hike becomes steeper and more challenging. And you wouldn’t even realise it, but soon the green rails along the steps disappear.

The final section of the Tsing Shan Path is a rugged, dirt trail. There are a couple of steep sections, but for the most part, it’s not too difficult.

No more railing as the hike gets slightly more strenuous

Along one of the stretches of the trail is a viewing ledge. And from this height, you can finally get amazing views of Tuen Mun and even Shenzhen.

As the trail continues, the transmitting station on top of Castle Peak keeps getting closer. And at the end of the last flights of steps, there is hope in the form of a pavilion.

The final stretch of the Castle Peak Hike

The Pavilion Below Castle Peak

From the pavilion, Castle Peak is a short climb

Just below Castle Peak is a pavilion that sits at the meeting point of the two trails – the one from Tsing Shan Monastery and the other from Leung Tin Au.

But before you summon the energy to complete the last 100 metres of this hike, take a moment to walk behind the pavilion and admire the Castle Peak Hinterland.

This hinterland is a large rocky basin mostly designated as a firing range for the People’s Liberation Army. Its rugged beauty has often been compared to that of the Grand Canyon but on a much smaller scale.

Within the Castle Peak Hinterland is the popular hiking spot – Pineapple Mountain, or Por Lo Shan. The hill is named after the pineapple bun and is commonly referred to as the mini-canyon of Hong Kong. I highly recommend a hike to Pineapple Mountain.

After you’re done admiring the hinterland, it’s time to climb to the top of Castle Peak!

Walk between the transmitting station and the fence

Behind the fences is the Castle Peak triangulation station marker. But the best part of the summit is the views!

Walk to the edge of Castle Peak and look down to get a sense of what you’ve accomplished! Moreover, to appreciate the epic views!

From the top of Castle Peak, everything from the hinterland, Shenzhen, the bridge connecting the two cities, and a large part of the New Territories, Lantau Island is visible. The views are spectacular!

The all-encompassing view from on top of Castle Peak

Gold Coast, Tuen Mun, and the transmitting station on top of Castle Peak

Views of Tuen Mun and Shenzhen from Castle Peak

After admiring the views from Castle Peak, you can make your way back on the same trail.

Or if you’re feeling adventurous, you can hike back via Leung Tin Au. To do so, continue straight towards the small transmitting station from the pavilion instead of turning right.

The path opposite the pavilion heads down towards Leung Tin Au

The trail to Leung Tin Au

The trail from Leung Tin Au leading up to Castle Peak, with Lantau in the background

Once you arrive at Leung Tin Au, you can follow our Pineapple Mountain Hike guide to reach the San Wai Court bus stop and Light Rail stop. By following this route, you will complete the Castle Peak loop.

We hope you enjoyed our detailed guide to the Castle Peak Hike and learned a bit more about the history of Hong Kong along the way.

You got to sweat it out to earn these views!

Do make sure that you return for the Pineapple Mountain Hike if you haven’t already completed it. You can also read our guide to the High Junk Peak Hike, the other sharp peak in Hong Kong. 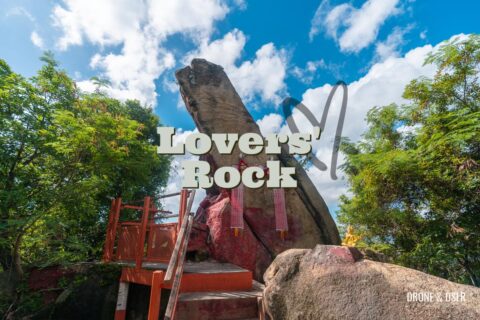 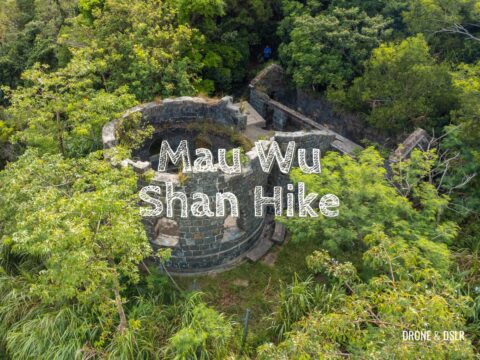