If you’re looking for a hike with the most scenic views of the western peninsula of Hong Kong Island, then look no further than Mount High West (Sai Ko Shan or 西高山 in Cantonese). At 494 metres, the Mount High West Viewing Point gets you sweeping 180-degree panoramic views of Cyberport, Pok Fu Lam, Kennedy Town, Sai Ying Pun, and right up to ICC and West Kowloon. And with this unobstructed view of the west, it’s also a fantastic spot to catch the sunset in Hong Kong.

Here’s a quick video to give you an idea of what to expect.


So, how does one hike to Mount High West? There are two simple options:

There’s also a third option from Pok Fu Lam that I recently discovered. So, let’s discuss all three options.

You can start your hike to High West from Kennedy Town or HKU MTR Station. If you’re starting from Kennedy Town, simply take the steps on Pokfield Road to Pok Fu Lam Road. This initial part is quite steep, so be prepared. You’re going to be out of breath even before you start!

If you’re coming from anywhere east of Kennedy Town, I highly advise you to start from HKU MTR Station. Take exit C that brings you out at Pok Fu Lam Road, and walk towards Pok Fu Lam.

No matter where you start, Kennedy Town or HKU, you need to get to the Sinopec Sandy Bay Gap station on Pok Fu Lam Road. This is your starting point for the hike. And next to the petrol station you’ll see a flight of stairs. That’s from where you escape the city.

This is your starting point for the High West hike

The initial steps are steep!

The hike looks quite intimidating from the start. All you see are steps that never seem to end. But don’t worry, it gets less steep once you reach the flat jogging trail with the benches and shaded seating area.

Once you reach here, take the path that immediately slips to the left and follow the signs for Pinewood Battery.

After a short distance, you’ll reach the first lookout point. Take a break and admire the views from here. Then continue towards Pinewood Battery. Keep your eyes open for another narrow, hidden path that takes you up another flight of steps. This time around the steps, through Lung Fu Shan Country Park, are very picturesque with bamboos on either side.

The view of the skyline from the first resting point

The steps soon turn into an easier slope

Continue on these steps till you finally reach Pinewood Battery.

Pinewood Battery is a historical landmark in Hong Kong and was once the city’s highest coastal defence post. I have another blog that is all about Pinewood Battery. You can either decide to take this opportunity to quickly explore what’s left of the battery, or come back another time.

The park along the Peak Morning Trail

From this point, only the final ascent remains. Take a break, fill up your bottles with water from the fountain in the park. And when you’re ready, let’s go!

The final stretch of the hike is on a trail called the Treacherous Trail. But don’t let the name scare you, it’s steep but short.

This trail starts from the other side of the park. You should notice a short flight of steps going down. Follow the path till it comes to a clearing. Then walk across the clearing and take the steps all the way to the top!

The stairs going down from the park

The start of the Treacherous Trail

An aerial view of the clearing on the Treacherous Trail

Again, take your time and go slow. Remember to keep admiring the view behind you as you climb.

Once you reach the top of Mount High West, you’ll see why this is such a scenic hike. You get to admire beautiful views on three sides. Cyberport and Lamma Island in the south; Lantau Island in the west; the Hong Kong skyline in the north. It’s simply beautiful!

And obviously, it goes without saying, the hike is best enjoyed on a clear day because then you can see all the way to Lamma Island, Lantau Island, and even Tai Mo Shan.

The gorgeous view of Hong Kong from Mount High West

The view of Cyberport and Lamma Island from Mount High West

To end the hike, you could go back down the same way. Or you could take the Peak Morning Trail to Victoria Peak.

Click here to open the map in Google Maps.

Hiking from Victoria Peak to High West is perfect for those who want a short and scenic hike, or someone who’s visiting Hong Kong for the first time and wants to experience a short hike for a much quainter and less touristy view.

To start, make your way to Victoria Peak, and then follow the Peak Morning Trail (Harlech Road Fitness Trail) for 1.2 km till you reach the park/seating area.

Enter the park, and take the Treacherous Trail on the other side. From there follow the trail and steps all the way to the viewing point for Mount High West (same as in option 1).

Click here to open the map in Google Maps.

Both options 1 and 2 ascend Mount High West from the east. However, there is also a trail on the western side from where you can climb up Mount High West. Unfortunately, the trail isn’t shown on Google Maps, but it’s easy to find.

The climb starts from the Hong Kong Trail Section 1, between HKU and Pok Fu Lam Reservoir. That means you can approach it from either side. Details on how to get to climb can be found on our Pok Fu Lam Reservoir to HKU hike post. Just follow the sign to The Peak when you reach this spot (picture below).

We made it to Mount High West

I hope you found this guide to hiking up Mount High West helpful. If you want a quick scenic hike that offers equally stunning views as Victoria Peak, this is for you. And it’s also good to know that it’s a great place to catch those beautiful sunset views. 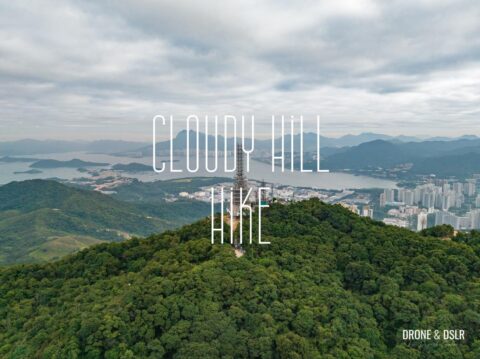 Really thanks for your post abt Mt High West. I took the 1st option and the experience was absolutely worth the effort. But since the impression I got from getting to the top was so huge, the view from The Peak (I went back with option 2) was underwhelmed to me =)))))

Hey Jane,
Thank you so much. Really happy that you found the guide helpful 🙂

Love your site!! Thank you so much for posting all these amazing hiking trails!!

Thank you very much! We’ll keep adding more hikes for you to visit us again 🙂

A simple practical guide for hiking in Hong Kong with very useful advice and information.

There are other ways to get to Mount High West. You can avoid that plight of stairs too. Those stairs could be very discouraging for people who don’t like stairs. 1) You can start hiking from the back of HKU, again from HKU you could start from different ways: from the back of Alfafa Cafe in Centennial Campus or follow the usual road from HKU up to the Victoria Peak. There is also another way from Pokfulam side.

You’re absolutely right! We have mentioned the way from Pokfulam in the post. I imagine that route will also apply to hiking from HKU because it’s between the HKU and Pokfulam Reservoir hike.