Yim Tin Tsai is a tiny island, rich in history and landmarks, located 15 minutes by ferry from the Sai Kung pier. The island’s historical significance and abandoned-spooky vibe makes it an an interesting destination for those who’re always looking to explore a new part of Sai Kung, and Hong Kong.

How to get to Yim Tin Tsai

Yim Tin Tsai can be reached by a kaito (a small ferry) from the Sai Kung Public Pier. Among the numerous kaito operators on the pier, look for those with the Yim Tin Tsai flag.

The easiest one to identify is last kiosk in the line of kaito operators. If you’re standing facing the pier, walk towards the right. The last operator in that line runs a kaito to Yim Tin Tsai.

The kaito only runs on Saturday, Sunday, and public holidays. A round-trip costs HK$50, and departure times are as follow:

Before you board the kaito, remember to collect your heart sticker. This sticker will get you entry if you’re planning on visiting the salt pans at Yim Tin Tsai.

Yim Tin Tsai literally means “Little Salt Pan” in Cantonese. This little island was once home to 500 to 1,200 people who lived farming, fishing and salt-making here. That was before they left island and abandoned their villages. And soon, this island became known as Hong Kong’s “Ghost Island”.

An abandoned house with a fallen tree, Yim Tin Tsai

Today, the island has been revived thanks to a group of motivated villagers. Ecotourism and day-trippers have grown as more and more want to explore Yim Tin Tsai. The island is full interesting remnants of its past and as it’s only 0.24 square kms, it’s incredibly easy to explore on foot.

But first, let’s learn about Yim Tin Tsai past and why it’s so interesting.

The first settlers were the Chan family of the Hakka clan who came to the island came from Yim Tin, now part of the Yantian District in Shenzhen, Guangdong. The survived on the island farming and fishing. They were also the ones who developed salt farms on the island and made their living selling the salt.

Religion also made its way to the island as early as the first settlers. In 1864, Catholic priests began evangelising the villagers, and by 1875 everyone on the island was baptised. In 1890, a new village chapel was set up by Rev. Joseph Freinademetz.

A statue of St. Joseph Freinademetz at the old chapel

At its peak in the 1940s, there were a 1,000 people living on the island. But as the years progressed, rural life became increasingly difficult. By the 1960s, families left for education beyond the village’s only primary school. The island’s salt farming had also shut down because of cheaper salt from China and Vietnam.

An aerial view of the abandoned houses on Yim Tin Tsai

Slowly the population dwindled until the last of the villagers left by the 1990s. And soon, Yim Tin Tsai lay abandoned.

Around 2000, descendants of the original villagers returned to Yim Tin Tsai and started a movement to revive the island. Their timing couldn’t have been better as in 2003 the Catholic Church canonised Joseph Freinademetz, an influential missionary who lived among the villagers in the 1800s. In 2004, a charitable foundation donated funds through the Catholic Church to renovate the island’s historical chapel.

From when the chapel was revived

The villagers next created a heritage trail around the old Hakka homes, built a home-wares and ceramics museum, and even revived the old salt fields.

The new and improved Yim Tin Tsai is now a popular destination for day-trippers who come to Sai Kung. And with so much history, there are plenty of landmarks to admire. Here are the top attractions on Yim Tin Tsai island.

Below is the map of all the attractions on the island.

However, below I’m going to let you know which were our favourite sites.

The chapel is the main landmark on the island. It can be seen perched on top of a hill as you get off the kaito. In fact, it is literally around the corner from the pier.

The chapel is built in Italian Romanesque style and is classified as a Grade III historic building. It is simple and elegant, with an intimate prayer hall.

When we had gone to the island, there was a free concert. We sat inside listening to the music, admiring the minimalist red and gold accented altar. It was so beautiful, and peaceful!

In 2005, the St. Joseph’s Chapel was honoured with a award of merit by the UNESCO Asia-Pacific Heritage Awards for Culture Heritage Conservation.

Right next to the chapel is the old school that was shut down in 1990 due to lack of students.

Looking down on St. Jospeh’s Chapel and the old village school in Yim Tin Tsai

The ancient salt pans on the island were among the things that were revived by the passionate villagers and donations. Today, the salt pans of Yim Tin Tsai have been restored to their former glory and are fully functional. They also have an educational visitor centre that explains each step of the salt production process. Again, remember to show your heart sticker to gain access.

Way to the salt farm on Yim Tin Tsai

The evaporation pool in the salt pan, Yim Tin Tsai

Looking down on the salt farms of Yim Tin Tsai

In 2015, these resurrected salt fields also earned a UNESCO distinction for conserving an important piece of Hong Kong’s industrial heritage.

If you’re a fan of spooky, old, abandoned homes that have been overrun by nature, then the old Hakka homes of Yim Tin Tsai won’t disappoint you. From the foot of the chapel, follow the signs for the Heritage Trail. Walk along the trail as you admire the old houses lying in decay. Most of the houses are still owned by the descendants of the original owners.

Overrun by nature, an abandoned house in Yim Tin Tsai

An old abandoned house with a large porch and balcony

A row of abandoned houses in Yim Tin Tsai

Peer inside the homes and you’ll find that many houses still contain belongings of their owners, from utensils to furniture.

Among the abandoned houses lies the old St Joseph’s Chapel, which was also St. Joseph Freinademetz’s old dwelling. Step inside to admire the revived interiors, that includes his statue.

The site of the old chapel of Yim Tin Tsai

A quote from St. Joseph Freinademetz

The site of the old chapel in Yim Tin Tsai village

Although the pavilion is not part of the island’s history, it is the spot from where you can get the best views of the entire island, and also the Jockey Club Kau Sai Chau Public Golf Course. Simply walk past till the end of the Heritage Trail till the path splits in two. The path on the left take you to the village well, and the path carries on to the pavilion. The hike is short and quite easy.

Keep in mind that there are two pavilions. Make sure you walk till the second pavilion for the better views. From there you can also see the Jade-Girdle Bridge, a breakwater that connects Yim Tin Tsai to the golf course. Don’t forget to admire the surrounding mangroves from there too!

Little did we know that Yim Tin Tsai has three restaurants serving everything from old Hakka food, to roasted chicken.

Chef de Yim Tin is a quaint little restaurant right beside the pier. It has both indoor and outdoor seating, and serves drinks with a limited food menu. From what we heard, the food was pretty good at the restaurant.

It’s also a great spot to enjoy a drink while you wait for your kaito back to Sai Kung.

Just up the walking ramp from Chef de Yim Tin is a local food kiosk refitted from the old communal office that serves noodles, and other local dishes. They also serve traditional Hakka dumplings in four flavours!

Although we didn’t grab the name of the third restaurant, which is right next to the steps of the salt pan, it has a big sign for wood-fired roast chicken. If that’s something you’re interested in, you can make your reservations by calling 94674448.

We hope you enjoyed this extensive guide to Yim Tin Tsai island and learned a bit more about its history and top attractions. The island is really compact and can be easily covered in a couple of hours. It makes for a great day-trip to be honest.

An aerial view from next to the pavilion – Yim Tin Tsai, Sai Kung

If you’re looking for something more adventurous, check out our guide to Sharp Island (that is close to Yim Tin Tsai), or our guide to Sai Kung. 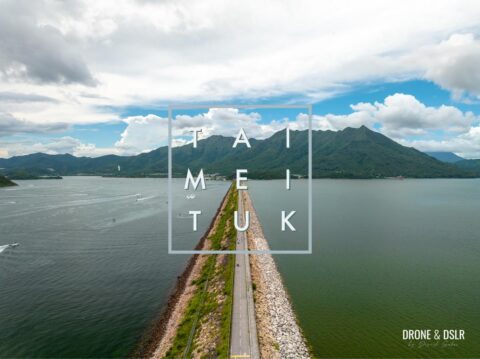 Is the ferry ride to Yim Tin Tsai less bumpy and larger than the ferry that takes visitors to and from Sai Wan beach?

That’s right. It’s a kaito ferry – larger and slower. Don’t think it should cause you motion sickness.