The Hong Kong Greenhouse Trail – Lamma Island Route is an eco-heritage walk across the northern peninsula of Lamma Island.

The trail crosses numerous beaches and villages in the north and explores the area’s natural habitat. I found it to be a great way to experience a different part of Lamma Island, one that is not frequented by visitors.

So, if you’re in the mood to explore the villages and habitat of north Lamma, then the Hong Kong Greenhouse Trail – Lamma Island Route might be of interest to you.

I recently learned that there are nine eco-heritage routes maintained by HK Electric Company, and the Hong Kong Greenhouse Trail – Lamma Island Route is one of them. And at seven words, it’s also the longest trail name that I’ve come across!

This Hong Kong Greenhouse Trail aims to educate visitors about the area’s natural habitat of trees, insects, and birds.

Learn about the habitat of Lamma Island through this walk

But even if you’re not interested in learning about that, the Hong Kong Greenhouse Trail – Lamma Island Route is an easy exploratory walk.

The ferry pier can be reached from Central or Aberdeen, and the timetable can be found on the operators’ websites.

The Hong Kong Greenhouse Trail – Lamma Island Route takes a tour of the villages in the north of Lamma Island. So, from the ferry pier, it’s time to head to the first village on the trail.

The trail begins from the ferry pier

As you exit the ferry pier, take the first left towards the North Lamma Public Library and walk on the path between all the cycles.

Take the steps behind the library and at the landing, follow the path to the left.

Take these steps behind the North Lamma Public Library

Stay to the left

Walk between the village houses and stay on the path as it curves at the end. From here you can admire the views of the ferry pier and the Lamma Power Station.

Walk between the houses

Follow the path as it turns left after the houses

The view of the ferry pier and the power plant

The path then turns right onto a small, narrow beach. I have to say that this is the easiest beach to get to from the Yung Shue Wan Pier!

The narrow beach around the corner

The beach is usually frequented by residents of nearby villages and can get a little crowded over the weekends.

At the end of the beach, take the steps uphill to arrive at O Tsai Village.

Take the steps up to O Tsai after the beach

Now, navigating through the houses in O Tsai can be a bit tricky. But it involves walking in front of the first row of the houses, then following the path behind, and then returning to the front.

Walk in front of the first row of houses

Navigating through the houses in O Tsai is a bit tricky

After the last house in O Tsai, the path splits in two. It is possible to reach Po Wan Yuen through both paths, but we chose to go straight.

After O Tsai, the path gently climbs uphill and reaches a row of houses in Po Wa Yuen. Turn left at the bench and then left again at the fork (stay on the side of the refuse collection area).

Turn left at the bench

After the village, the path gently descends towards the shore and you can once again hear the sounds of the waves.

Views of the sea as you exit Po Wa Yuen

The beach, the villas

A message for those entering the beach

The beach is worthy of a quick stop, but if you’re looking for the best views, they’re further ahead. To get there, continue walking on the path behind the beach as it gently climbs uphill.

Continue walking uphill from the beach to access the viewing point

The trail then arrives at the vantage point, overlooking Nga Kau Wan. It overlooks the bay, the beach, Lamma 1, and the power plant in the background.

The views of Nga Kau Wan from the viewing point

Up ahead the trail passes by a few more village houses before moving away from the sea. I found this part of north Lamma to be very rustic and idyllic.

After approximately 400 metres from Nga Kau Wan, the Hong Kong Greenhouse Trail – Lamma Island Route arrives at a left turn for Shek Kok Tsui. To continue towards Pak Kok Tsuen stay on the trail as it curves right.

Thankfully the trail is shaded

Stay on the trail as it curves right

After this point, the trail remains relatively flat for the next 200 metres before it reaches Pak Kok Tsuen.

A green and peaceful walk

As you arrive at the village, instead of walking behind the houses, take the steps downhill and follow the path as it returns to the shore. From the steps, you can also catch a glimpse of Hong Kong Island.

Walk down towards Pak Kok Pier

At the northern end of Lamma Island

Back next to the shore

At the end of the steps and downhill path, turn right and then stay to the left to reach the Pak Kok Ferry Pier.

If you took the kaito from Aberdeen, you might recall stopping at the Pak Kok Ferry Pier. But don’t turn towards the ferry pier. Instead, follow the sign for Pak Kok San Tsuen.

The path continues between some beautiful houses in Pak Kok Tsuen before exiting this small village.

Walk between these beautiful village homes

At the end of the village, the path splits in two. Stay on the left and continue towards Pak Kok San Tsuen.

From here, it’s a short and verdant walk that connects to the next village.

A lush path to the next village

Pak Kok San Tsuen is another small village on the Hong Kong Greenhouse Trail – Lamma Island Route with its own history.

To cross the village, take the path on the left at the start and walk up between the houses. Then turn right and walk straight out of the village.

Once again, cut across the village

The path slowly descends before merging with a downhill ramp.

Turn right and walk downhill to the plains with the farms.

Go past all the farms

At the end of the farmland, the path splits into two. Turn right to enter Pak Kok Kau Tsuen.

At the end of the farms, turn right

Unlike Pak Kok San Tsuen, Pak Kok Kau Tsuen has a bit more character and history. For starters, there is an old abandoned house to admire just as you enter the village.

Continue down the path from the old house and just before the village ends, there is another abandoned house that is even older!

Walk down the path to cross the village

Pak Kok Kau Tsuen also has an interesting history. It was used by the Japanese army during WWII as a strategic supply station and many of the bunkers and forts can still be found on the surrounding hills. Although we love exploring WWII relics in Hong Kong, we didn’t set out to find these bunkers.

A walk through the ecological habitat

The next section of the Hong Kong Greenhouse Trail – Lamma Island Route is a short uphill walk through an area of ecological significance.

There are numerous educational signposts along this section of the trail that highlight some of the trees and shrubs found in the area.

Signpost for the incense tree

Learn about the unforgettable leaf

Along this section of the trail, you’ll find the large Chinese incense trees, knotweeds, sandpaper vines, and wild berries.

Take a moment to read about their history and significance.

At the end of the uphill climb is a pavilion to take a quick break before continuing towards the next village.

The pavilion at the end of the climb

The Hong Kong Greenhouse Trail – Lamma Island Route is slowly coming to a close, but not before crossing another village.

As the trail gently descends after the pavilion, it passes through more of Lamma’s untouched wilderness. I personally love trails where I am surrounded by nature and there’s no soul in sight!

After the pavilion, it’s downhill

But the solitude only lasts for about 500 metres before the trail reaches the outskirts of Tai Peng Kau Tsuen (Tai Peng Kau Old Village).

Approaching the next village

After crossing the first few houses, the trail splits in two. And although the path on the right heads to Yung Shue Wan, turn left to enter Tai Peng Kau Old Village.

Walk past the houses in Tai Peng Old Village

Walk between the houses till you reach the end of the path with the outdoor seating and refuse collection area.

Turn left for a quick detour

At this point, take a quick 30-metre detour to the left. Here you’ll find an old village house on display.

An old village house to admire

After viewing the old village house, return to the refuse collection area and the outdoor seating area and take the path downhill.

Return to the refuse collection point and take the path downhill

Stay to the right as the path descends towards Tai Peng Kau New Village. From this descent, the Lamma Power Station is once again visible.

Stay to the right as you walk downhill

The views of the power plant return

The path continues alongside the houses in Tai Peng Kau New Village on one side, and Lamma’s wilderness on the other.

Continue walking till you reach a small bridge that crosses a man-made stream. I honestly found the view of the stream running between the houses of Yung Shue Wan quite picturesque!

Cross this bridge and turn right

I loved this view at Yung Shue Wan New Village

As you cross the bridge, you should begin to hear the sounds of restaurants and bars. You’re now back in civilisation!

And we’re back at Yung Shue Wan!

Just another 90 metres ahead, the trail merges with Yung Shue Wan Main Street, right next to Dale Candela and BB Seaview Restaurant and Bar.

This is where the trail ends, next to all the restaurants

Exploring a different side of Lamma Island

As I mentioned earlier, the Hong Kong Greenhouse Trail – Lamma Island Route is a long detour to get to Yung Shue Wan Village from the ferry pier.

But it’s also a wonderful walk around the north of Lamma Island that offers a glimpse into the numerous villages, beaches, and natural habitat of the island.

It’s a walk that you can undertake on a relatively hot day to build up an appetite! Because that’s exactly what we did! After we completed the Hong Kong Greenhouse Trail – Lamma Island Route, we enjoyed a delicious meal at Dale Candela!

Make sure you check out our Ultimate Guide to Lamma Island to learn about more things to do on the island. And feel free to drop us a comment below and share this post on the social media channel of your choice. 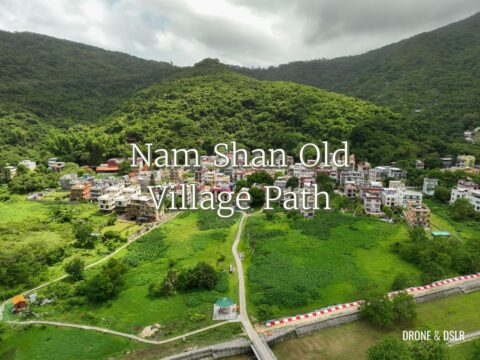 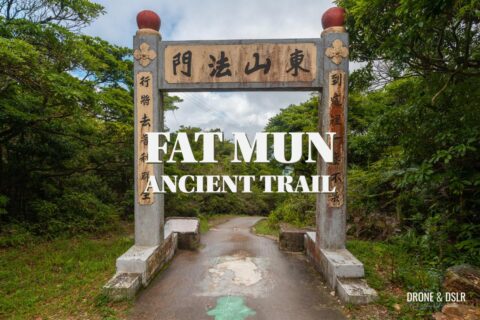