Kuang Si Falls is the reason why we visited Laos in the first place. A year ago, my wife saw these pictures of Kuang Si and was completely enamored by its gorgeous, turquoise-blue colours! So, naturally we planned a holiday to Laos with the primary goal of visiting the falls.

The Legend behind Tat Kuang Si

According to one local legend, Kuang Si Falls were formed when a wise old man revealed the waters of Nam Si by digging deep into the Earth.

After the waters came to Kuang Si, a beautiful golden deer made its home under a big rock that protruded from the falls. The sound of the water falling on this rock created such an enchanting echo that it drew people to it all the way from China.

Unfortunately, the big rock is no longer visible as it fell off after an earthquake in December 2001.

If the legend doesn’t paint a picture of the waterfall’s beauty, maybe this video will.


How to get to Kuang Si Falls?

There are plenty of ways to get to Kuang Si Falls from Luang Prabang.

Tuk-tuks are quite popular in Luang Prabang and in fact you can share one from the city to the falls. The tuk-tuk usually waits for other people to join, which reduces the per head cost. It usually costs around 200,000-250,000 Kip (about USD 25) which includes the return journey, as long as all the passengers agree to come back together.

You can obviously hire the tuk-tuk for yourself and not worry about other passengers. The price remains the same, but the tuk-tuk driver then waits only for you.

There are plenty of min-vans that run between Luang Prabang and Kuang Si Falls on a daily basis. Min-vans are definitely more comfortable but have a fixed route and schedule. So, you are bound by the van’s timings. But for around 60,000 Kip per head (about USD 7), they’re a good deal.

Again, you can also hire a private mini-van and have all the freedom. Chartering your own mini-van should set you back by around 500,000 Kip (about USD 56). Speak with the people at your accommodation to help you arrange one.

A closer look at this marvel of a waterfall

So to sum up, if you want the freedom and flexibility hire a private mini-van or tuk-tuk. If you’re on a budget, go for the shared option.

The drive from Luang Prabang to Kuang Si should take anywhere between 45-60 minutes.

Other modes of transport

If you’re adventurous, you can also cycle to Kuang Si Falls or rent a scooter. Do keep in mind that the road isn’t as smooth all the way to the falls and can get very dusty along the way. So, I would definitely advise you to buy a pollution mask before you set out.

You can also take a boat ride along the Mekong to get to the falls. You can learn more about these exotic boat rides from Tiger Trail (day trek or Mekong River cruise) or Banana Boat Laos.

Cruising along the Mekong

If you prefer a guided tour of Kuang Si Falls, here is a day tour that we can recommend which also include the Pak Ou Caves.

The best time to visit Kuang Si Falls is during the dry season, that lasts from December to April. Obviously this is also peak tourist season, so it can get extremely crowded.

We visited Kuang Si in early February and naturally it was full of tourists. We had to wait for ages to get this photo.

Us at Kuang Si Falls, Laos

The best time during the day to visit the falls is early in the morning, before the bulk of the tourists arrive. We noticed large tour groups arrive around 2 PM, after lunch.

Personally, I would say 9-9:30 is a good time. And budget at least 2 hours to admire the falls, and maybe a swim.

So what’s the best way to enjoy the falls?

A rough map of the Kuang Si Falls

Once you enter the paid area, you’ll notice a fork in the road. Both ways lead you to the falls, but personally I would advise you to turn right. Why? Because if you turn left, the path leads you straight to the main waterfall. And that’s the best part of Kuang Si Falls, which you should save for the end.

Turn right and head down towards the lower, shallow pools of Kuang Si Falls. On the way, there’s a Bear Rescue Centre that you can stop by to look at Asian black bears. They’re usually lounging around on the trees in the open, but there’s also a small enclosure for bear cubs.

Just after the Bear Rescue Centre you’ll arrive at the first pool of Kuang Si Falls. This is quite a shallow pool. And there are a few fish in the pool who are happy to nibble on you!

Admiring the least impressive level of the Kuang Si Falls

The bottom most pool at Kuang Si Falls

From here, walk uphill to arrive at the largest and most beautiful swimming area. Unfortunately, it also happens to be the most crowded area. Either way, this beautiful pool of natural turquoise water is waiting you to swim in.

Above the big swimming area there are a few secluded pools to explore if you want to get away from the crowds.

Neha exploring a hidden area of the Kuang Si Falls

There is a small waterfall area above the large swimming area, and then beyond that are the famous cascades of Kuang Si Falls.

Now, there are a few hidden pools between this small waterfall and the cascades, behind the trees.

Another beautiful part of the Kuang Si Falls

Another hidden pool at the back at Kuang Si Falls

We did spot a few people enjoying the hidden pools all to themselves (as you can probably spot in the pic above), but we didn’t venture out ourselves to find a way to get there.

After you’re done admiring the cascades, make your way to the final stop – the main Kuang Si Waterfall. The main waterfall has a drop of 60 meters (200 feet), and is so breathtakingly gorgeous, that it looks man-made!

Us at Kuang Si Falls, Laos

Make sure you walk across the bridge and admire the waterfall with the sun shining from behind.

There is a small picnic area to the side of the waterfall from where you can not only marvel the beauty the waterfall but also bring your lunch or snack to enjoy.

Why is Kuang Si Waterfall So Blue?

The water at Kuang Si flows over many limestone rocks on its way from the springs, to the main waterfall and then down the cascades. Limestone particles get collected by the water during this journey. The particles contain high levels of calcium carbonate that reflects light, making the water appear a stunning turquoise-blue colour.

Lady photobombed my shot, but I decided to let her stay in

The Market At Kuang Si

There is a small local market outside the falls area that sells food, snacks, and clothes (including swimwear).

The market outside Kuang Si Falls

We grabbed our lunch here after visiting the falls. We couldn’t resist the fish and chicken being barbecued on coal. Which to be fair was quite delicious and very reasonably priced.

And finally, once you’re done with the visit, you can head on back to Luang Prabang to catch the sunset!

We hope you enjoyed our guide to Kuang Si Falls and find it helpful. There are plenty more photos of the falls in our gallery to inspire you. 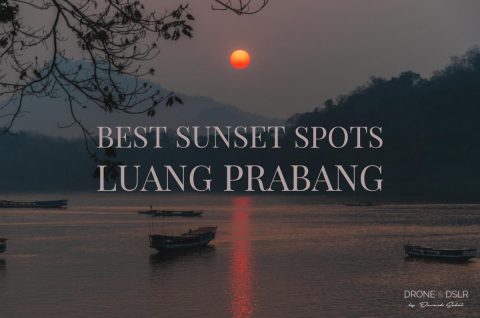