1 Of The 4 Green Sand Beaches In The World

If the black sand beach didn’t already blow us away with its beauty, we had something more incredible in store for us on Hawaii’s Big Island – a green sand beach.

Apparently, there are only 4 green sand beaches in the world, and one of them is on the Big Island in Hawaii. This is the Papakolea Beach, and its located on the south side of the Big Island.

A green wall on the left, black rocks on the right

The others are Talofofo Beach, Guam, Punta Cormorant on Floreana Island in the Galapagos Islands, and Hornindalsvatnet, Norway.

Directions To The Green Sand Beach

The Papakolea Beach (also known as the Mahana Beach) is located near South Point in the Kau district of the Big Island. The beach isn’t the easiest to access, or at least the last mile connectivity is terrible. Whether you’re in Kona or Hilo, you need to first drive to the southern most point on the Big Island. From Volcano town, it took us a good 1 hour 45 minute to drive there. Along the way we did encounter some beautiful views.

In fact, the views at South Point too were stunning. So you may want to soak some of it up as your stretch your legs before heading down to the green sand beach.

From South Point, you’ll notice signs pointing you towards the green sand beach car park. Park your vehicle, and from there you have two options to get to the beach: hike, or take a truck that charges $15 for a round trip.

Under no circumstances should you even think about driving your own car to the beach. The terrain will simply not allow for it, even if you have a 4×4. It’s just not safe. Also, and I can’t stress this enough, wear a rag-tag pair or t-shirt and shorts. The ride to the beach is extremely dusty, and sand is guaranteed to get into everything! Protect your eyes (contact lenses wearers), bags, cameras, etc. You’ve been warned!

So, we decided to take the truck because time was of the essence for us that. After visiting the beach we had to drive all the way back to Hilo before heading to Mauna Kea. But if you have the time, hike it. It takes up to an hour, compared to 20 minutes on the truck, and you get to admire the views at your own leisure.

Here is a short video of the drive to the beach.

Inside A Cinder Cone

The green sand beach although quite small, isn’t easy to miss. Not only because its green in colour, but because it was once insde a cinder cone and the walls are still visible.

Descending into the Papakolea Beach

Actually, the beach itself was at one point inside the volcano. The three sides of the cone are still intact, with the ocean coming in from what would have been the eastern edge. So technically you’re now swimming in an ancient volcano’s cinder cone with green sand! How awesome it that!

Why Is The Sand Green?

The green sand at the Papakolea Beach, Big Island, Hawaii

The sand at the Papakolea Beach is composed primarily of olivine crystals which erode out of basalt (lava) flows. The crystals are heavier than most sand types on the beach and remain behind when lighter sand grains are washed away by strong waves.

What was once inside a cinder cone

If you’re headed to the Big Island, this is one beach that you do not want to miss. It’s one of the most unique beaches in the world, and you’d hate yourself for missing this opportunity of a lifetime.

More Photos Of The Big Island
big island things to do 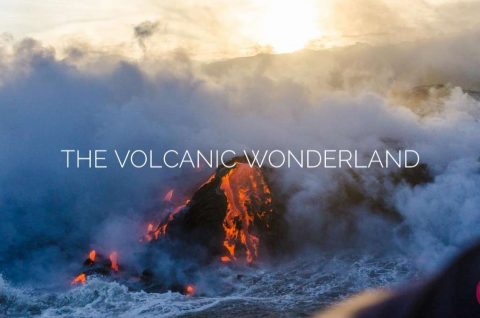 More on Hawaii’s strange GREEN sand beach, and we’d love your review of it: https://lookintohawaii.com/hawaii/32855/papakolea-green-sand-beach-beaches-big-island-naalehu-hi