3 Must Visit Temples In Angkor

Angkor was the capital city of the Khmer Empire, which flourished from the 9th to 15th centuries. The ruins of the city are located amid forests north of the Great Lake (Tonlé Sap) and south of the Kulen Hills, near Siem Reap.

There are over 1,000 temples in Angkor, ranging from nondescript piles of brick and rubble scattered through rice fields to the Angkor Wat, the world’s largest single religious monument. Many of the temples at Angkor have been restored to their former glory.

With so many temples, which ones to visit can be an intimidating question. Walk around the city of Angkor and you’ll understand what I’m talking about. There’s temple after temple. But not all temples were created equally. These were my favourite temples from the ancient city of Angkor.

The Temple With The Many Faces

At the centre of Angkor Thom lies the 12th century Bayon – the temple with numerous faces. It’s hard to forget Bayon with its 216 faces of Avalokiteshvara (Buddha of Compassion), which bear more of a resemblance to the then king. These giant heads stare down from every side, exuding power and control with a hint of compassion.

The stone faces of Bayon

Stone faces along the corners of Bayon

The serenity of the stone faces

The temple was built as an expression of genius, and inflated ego of Jayavarman VII, who adopted Mahayana Buddhism, unlike his predecessors who worshipped the Hindu deities of Shiva and Vishnu. This is what sets Bayon apart from the other temples in Angkor.

The Largest Religious Monument In The World

The crowds descend upon Angkor Wat at sunrise

Angkor Wat is probably the most famous, and iconic temple in all of Angkor. It’s perfectly preserved and is admired for its grandeur, symmetry of architecture, and extensive bas-reliefs, each of which tells a story. Fun fact, the temple’s silhouette embraces the Cambodian flag.

A swimming pool inside Angkor Wat

People taking a break from the heat

Steps to the top of Angkor Wat

The ceiling inside of Angkor Wat

Conceived by Suryavarman II, Angkor Wat took about 30 years to build. It was originally constructed as a Hindu temple of god Vishnu for the Khmer Empire, gradually transforming into a Buddhist temple toward the end of the 12th century. However, as the temple faces west, it is generally believed to have been a funeral temple for the king (symbolically, west is the direction of death).

Angkor Wat is also famous for its apsaras (heavenly nymphs). More than 3,000 apsaras are carved into the walls of Angkor Wat, each of them unique.

Angkor Wat is the largest temple in Angkor city, and will definitely take most of your time. It is also extremely popular to visit during sunrise, as the rising sun illuminates the sky behind the temple.

Ta Prohm – The temple made famous by Tomb Raider the movie

Ta Prohm is a must-visit for anyone going to Angkor. It is by far the most unforgettable temple.

The temple was a monastery built by Jayavarman VII as a residence for his mother. Today, the destructive force of nature has beautifully wreaked havoc over the ruins of the temple. The compound is largely consumed by the jungle, and as you walk through the temple you see giant trees growing out of the top of the temple itself.

The most famous tree at Ta Prohm, almost touching the sky with its overgrown roots

The overgrown trees of Ta Prohm

The ruins at Ta Prohm

The temple and its trees were most recently made famous by the Tomb Raider movie. One of the most famous spots in Ta Prohm is the so-called ‘Tomb Raider tree’, where Lara Croft (played by Angelina Jolie) picked a jasmine flower before falling through the Earth.

These were my favourite temples from Angkor. I know a lot of people find Banteay Srei among the best temples. I agree it’s beautiful and intricate but not as grand as these other temples. Be sure to see my photos from the ancient city of Angkor to get a better idea of what else is there to visit.

Entry to the temples is controlled by a single pass. We bought our passes from next to the Angkor Panorama Museum.

Access to temples may be denied if visitors aren’t appropriately dressed. Basically, it means that you must have your shoulders, and knees covered. However, in our experience, we noticed that this rule was more strictly applied to women than men. Either way, be on the safer side and dress appropriately.

The ancient city of Angkor is about 30 mins to the north of Siem Reap and there are many ways get to Angkor. The simplest is to hire a tuk-tuk for the day, or on a ride basis.

Getting In And Around Angkor

For the more health-conscious, cycles are available for hire. Although we did notice numerous tourists on cycles, I personally wouldn’t advise it because of the heat. It’s hot and humid in Siem Reap all year round. 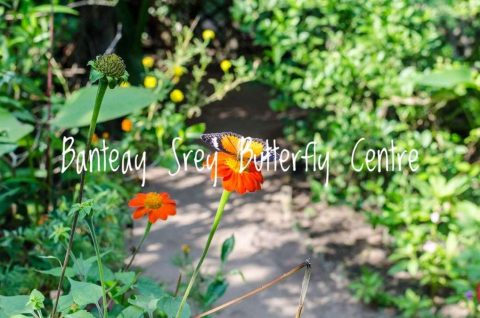